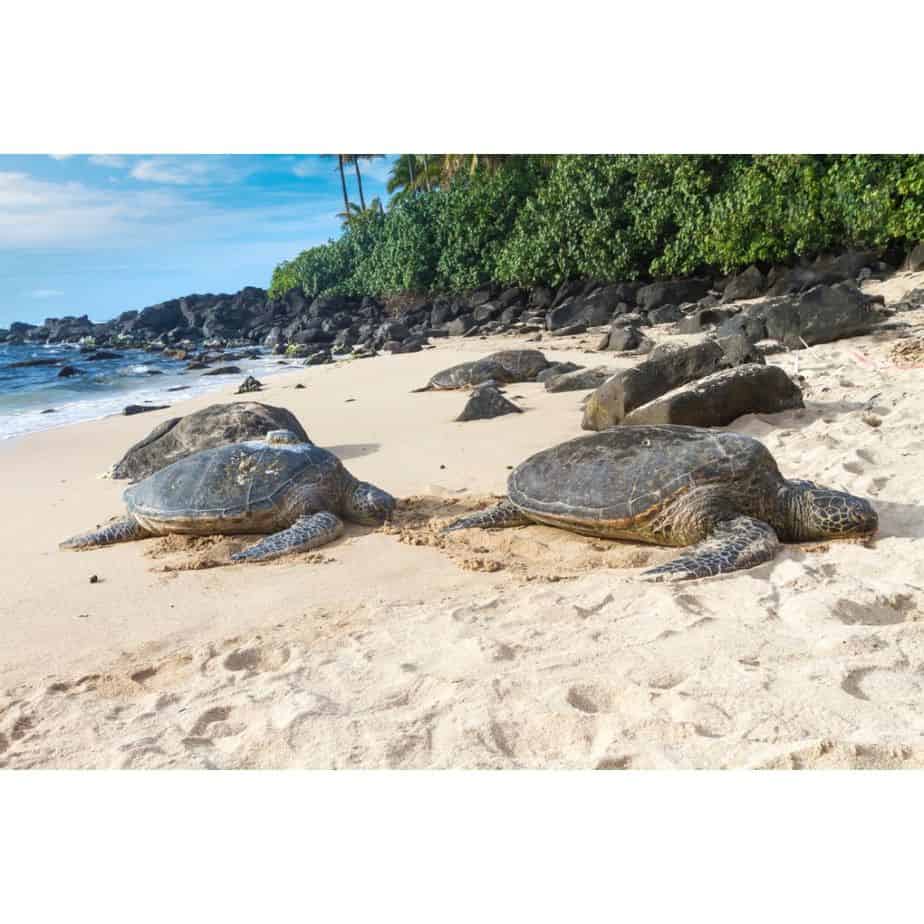 If you’re on vacation in Oahu, you’d likely want to see some turtles!

There are so many places to see turtles in Oahu, but the most popular place to go is Laniakea Beach, also known as Turtle Beach to some people.

This beach is named after the creatures that call it home—the magnificent green sea turtles. It’s a popular place amongst tourists since it’s one of the best beaches on the north shore of Oahu.

This blog post will provide an overview of Turtle Beach, discuss the best times to see turtles, provide additional recommendations on where in Oahu you can go to see turtles, and so much more.

Turtle Beach is officially known as Laniekea Beach, but we will refer to it as Turtle Beach in this article since most tourists call it that.

It’s located on the north shore of Oahu along the 7-mile miracle stretch of sandy beaches.

It’s a pretty popular site in Oahu because of its perfect surfing conditions in the wintertime, the beach’s significance to Hawaiian green sea turtles, and some of the best snorkeling on the island of Oahu.

Many people often come here to spot the magnificent green sea turtles, and we can’t blame them at all.

What makes Turtle Beach so special? Most people believe that more turtles live at Turtle Beach than any other beach on Oahu.

You can find multiple turtles of various sizes basking in the sun, relaxing, and digesting. The warm sand helps them digest the algae they eat off the rocks in the water.

While there is a bigger chance of spotting sea turtles at Turtle Beach, that doesn’t mean that you will always see turtles when you go there.

Keep in mind that turtles are wild animals, which means their behavior is unpredictable. There are times when you will see none at all.

Just have an open mind when you go that way so that you are not disappointed if you don’t see any.

Again, there are other places you can spot green sea turtles on the island, so you don’t have to be limited to one option. Who knows, maybe you might get lucky and see them somewhere else!

Turtles in Hawaii are a threatened species and thus protected under the Endangered Species Act of 1973, which makes it illegal to touch, feed, harass, harm, or take them from their habitat.

They can be found all over the Hawaiian islands, but they reside in specific areas more than others.

You’ll find both juvenile and adult sea turtles with varying shades of green, brown, or black on their shells with a lighter, yellow underbelly.

SEE ALSO: 25 Best Beaches in Hawaii For A Spectacular Trip

Things Not to Do While Visiting Turtle Beach Oahu

Don’t do the following while you are at the beach:

1) Touch: It’s illegal to touch sea turtles, so do not disturb them by touching them. I know it can be tempting, but please resist the urge and protect the wildlife.

2) Feeding: Don’t feed the turtles under any circumstances. They might seem cute and hungry, but we don’t want to harm them by feeding them things that aren’t supposed to be apart of their diet.

3) Disturb: This might seem a bit obvious, but it’s important not to disturb the turtles while they’re basking/resting on the beach.

4) Get too close to the turtles: Always stay at least 10 feet away from turtles. Respect the honus (turtles) and give them some space. At Turtle Beach, sections with red ropes act as a sign for people not to cross over. You will also see volunteers who keep people from crossing the ropes at the beach.

The best time to see turtles in Hawaii is summer (May-October). During this time, the waves are calm and the water and sand are much warmer than in the winter months.

The best time to spot sea turtles is between 11:00 AM and 3:00 PM. Most of them will come out when the sun is the hottest.

That doesn’t mean that you can only see turtles during these times, it just means that your chances are higher in this timefrime.

In all honesty, I have seen turtles in Hawaii at different times, including close to sunset. As mentioned previously, turtles are wildlife and can be unpredictable sometimes.

How to Get to Turtle Beach

The best way to get to Turtle Beach is to rent a car and drive. As I always mention in my posts, put the address in Google Maps, which should take you right to your destination. Google Maps never disappoints!

Otherwise, here are the instructions”

The whole drive should take you about 53 minutes from Waikiki.

Where Else Can You See Turtles in Oahu?

Many people would be surprised to learn that there are many other places on the island of Oahu where you can spot sea turtles. Below are some of the places we have been able to spot them on the island.

If you find yourself on one of these beaches and don’t feel like driving all the way to the North Shore, you might be able to see the famous green sea turtles right at your favorite beach. Again, it’s not guaranteed, but you might get lucky and see some.

Here is the list of additional places to see turtles on Oahu:

Located on the North Shore of Oahu, Aweoweo Beach Park is a great beach to see turtles. I have heard multiple people say that Turtles are almost guaranteed at this beach.

You can read more about all Aweoweo Beach in our best places to snorkel in the Oahu article.

Sharks Cove on the north shore of Oahu is another popular place to snorkel, but it’s also known for spotting turtles too!

Located on the windward side of Oahu, Hanauma Bay is one of the best places to snorkel in Oahu. It’s definitely worth checking out.

Here you can actually swim with the turtles; just remember to keep your distance and respect the honu (turtles).

Located on the Leeward side, Electric Beach is one of Oahu’s best spots to see turtles. This beach is much less crowded than Hanauma Bay and Turtle Beach, but it’s an excellent spot for snorkeling.

Paradise Cove Beach is located on the windward side and is a great place to see turtles.

Kailua Beach and Lanikai Beach are some of Oahu’s most popular beaches and some of the best beaches on the island. If you are also into kayaking, Lanikai and Kailua are great spots to kayak on Oahu.

If you are already here (which many people will most likely be due to the popularity of the beaches), you might get lucky and spot one of these magnificent creatures.

What Else Can you Do Close to Turtle Beach?

What else can you do on the North Shore?

You can do many things on the North Shore besides seeing sea turtles. From visiting fascinating beaches to eating some of the best foods on the island the, options are endless.

Here is a list of some of our favorite activities to do on the North Shore. All these activities are not too far from Turtle Beach, so why not add them to your activity list if you are at the beach already!

Turtle Bay Resort is home to the famous Turtle Bay Beach, one of the best beaches on the North Shore of Oahu.

Not to be confused with Laniekea Beach, this is a good beach not too far from Turtle Beach. Turtle Bay Beach is a great place to see sea turtles, and it’s also an excellent beach for swimming and relaxing on the beach.

See Also: 15 Best Beaches in Oahu You Should Visit

Sunset Beach is located in the famous North Shore surfing area. There are tons of things you can do here, including watching surfers ride some of Hawaii’s biggest waves and watching one of Oahu’s best sunsets.

Spend Some Time in the Historic Haleiwa Town

Haleiwa is a great historic town and one of the most popular destinations on Oahu’s North Shore. There are great places to eat, relax, or grab a souvenir.

Don’t leave Oahu without trying some of the best food trucks on the North Shore of Oahu. Here you can try shrimp trucks, food carts, ice cream, fish tacos, BBQ chicken, and much more!

Waimea Bay is another of the most spectacular beaches on Oahu’s North Shore. It is famous for its large waves that host surfers riding every winter season.

If you are visiting in the summer months and want to cliff jump, Waimea Bay is an excellent place for that.

Waimea Falls is located across the street from Waimea Beach. Be sure to stop by to check out the waterfall and if you are up for it, you can swim in the waterfall pool.

The Ehukai Pillbox Hike is one of the best hikes on the NBorth Shore of Oahu, as well as one of the easiest hikes in Oahu. Be sure to check it out if you want some additional exercise after admiring turtles at the beach.

Go to the Dole Plantation

The Dole Plantation is a great place to learn about pineapple history, tour the plantation and eat some delicious pineapple food (just like all of Hawaii).

It’s not far from Turtle Beach, so why not stop by the next time you are close to the area.

As you can see, Turtle Beach (Laniekea Beach) is one of the best places in Oahu to see turtles.

However, remember that this isn’t the only place on Oahu to see turtles. There are tons of other beaches you can check out to spot these majestic creatures such as Sharks Cove, Hanauma Bay, Lanikai and Kailua Beaches, and many more.

The next time you are on Oahu, make sure to check out Turtle Beach and all the other places I mentioned in this article!

Mahalo for reading our post! Until next time, Aloha and happy turtle-sighting in Oahu!

A travel dreamer who fell in love with Hawaii and wants to share the beauty of the Islands. I enjoy nature, the ocean, mountains, adventure, and really anything outdoors.

Read more about my Hawaii adventures here. I hope that you’ll come along with me as I live out This Travel Dream!

The 11 Best Food Trucks in the North Shore Oahu