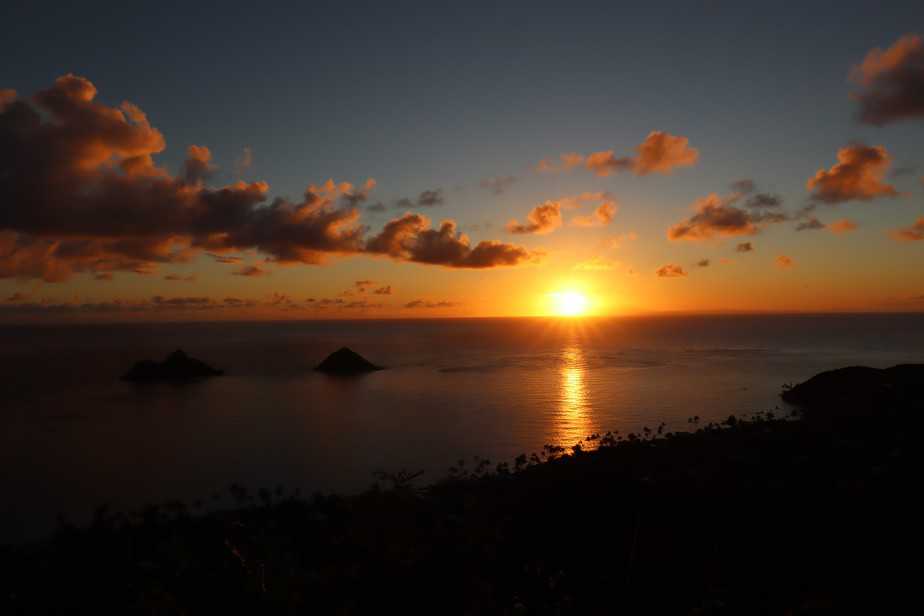 Have you ever wanted to hike in lush forests beside an active volcano? Or maybe you’d like to bask in the warmth of golden sand while you watch surfers attempting to stand as the waves bring them closer to shore? If the travel bug has bitten you and you’re finally ready to embark on your much-awaited trip to Hawaii, January is a great time to do it.

Note on Related Articles: This article is part of a series of articles to help our readers decide which month is best to visit the Hawaiian Islands. If you are thinking of going to Hawaii in a different month, please check out our other articles listed at the end of this one.

The weather in Hawaii is warm year-round, even during the winter months like January. The daytime high temperatures usually average in the low 80s at most beach resort locations. In the evenings, we recommend adding a light sweater or jacket to your packing list, as the temperatures can go into the low to mid-60s.

While rainfall levels are higher in January compared to the summer months, it’s not Hawaii’s rainiest month – that honor goes to December.

Where you’re staying on the islands is also a factor since each island has its own micro-climate. For example, you may find the ocean is always warm for swimming, but when you head to the volcano area (Big Island) or mountains (Maui), you may need to bundle up in a jacket.

See Also: 71 Awesome Things to Do on Oahu With Your Family

High temperatures during the day stay around 79°F, rarely exceeding 82°F or dropping below 76°F on average. Low temperatures are around 68°F, and usually don’t exceed 73°F or fall below 63°F.

Although January is a cooler month in Hawaii, you can still swim in the ocean comfortably. The water temperature stays around 72°F to 76°F, making the water a little bit cooler than the outside temperatures during the day.

If you’re worried about a hurricane hitting the islands in January – don’t. The ocean is calm this time of the year. The hurricane season officially runs from June 1st to November 30th. The most you can expect is a tropical storm with heavy rain, but that’s very rare in January too.

Cost to Visit Hawaii in January

When it comes to flights and lodging, avoiding New Year’s Day will help you find affordable rates. The first week of January is more expensive due to the holiday season, but prices tend to lower beyond that.

Similarly, hotel prices in January are at their highest during the first week; you’ll be hard-pressed to find a room for less than $350 – $385 per night. Come second week, however, the rates usually go down to $190 – $240 per night. If you’re looking for more affordable options, consider Airbnb or Vrbo. You can find a really good rental condo for $95 – $135 even during the busiest of seasons.

Renting a car anywhere in Hawaii costs about $100 per day or even more. A lack of vehicle stock has led to an increase in prices.

The best time to purchase plane tickets and book your accommodations for a Hawaii trip in January is about 2-3 months before your departure date. We usually advice to book everything at least 30 days in advance, but January falls into the “winter holiday” period, which means a lot of people are traveling to Hawaii this time of year. You’d be better off making your arrangements well in advance.

Is January Crowded in Hawaii?

Kind of. The first few days of January are more crowded as the holiday season is still in full swing. The rest of the month, however, it’s not as crowded. One exception is the Martin Luther King Jr. Day on the 3rd Monday of January; this is when many tourists take advantage of the extra day to extend their vacation.

See also: Christmas Traditions in Hawaii: What To Expect When Visiting Around This Popular Holiday

There are several reasons you might specifically want to book your vacation to this archipelago in January:

The Volcom Pipeline Pro competition takes place at the Banzai Pipeline on the north shore of Oahu. Surfers from around the world compete in this annual event and are judged on the best wave selection as well as their creative maneuvers on the wave.

The Sony Open golf competition at the Waialae Country Club is also held in January. Over 144 of world’s greatest golf professionals compete for the title.

The Waimea Ocean Film Festival features movies about the ocean, surfing, ecological issues, and water sports like the Hawaiian canoe paddling. It’s held at the Waimea and Kohala Coast during the first weekend after New Year’s Day.

The Chinese New Year is celebrated in Lahaina during the last of January (or sometimes, the first week of February). The traditional event is accompanied by food booths, fireworks, lion dance, and many other activities.

The Ka Molokai Makahiki festival takes place every January. It commemorates the traditional time of peace in ancient Hawaii by re-creating performances through local musicians and dancers. In addition to delicious Hawaiian delicacies, you can partake in sporting competitions and games, and shop from the local artisan booths.

Whale Watching: If you’ve come to Hawaii during January, your tour cannot be complete without watching these magnificent sea creatures. January is when tens of thousands of humpback whales arrive in Hawaii for the winter season. The largest concentration of whales is found between Lanai, Molokai, and Maui. We highly recommend booking a whale watching tour from any of these islands for a front row seat to these creatures’ aquatic performance.

Swim at Tunnels Beach (Kauai): This half-moon-shaped beach is surrounded by green cliffs and the whitest sand you’ll ever see. If you’re up for some water action, you can go swimming, snorkeling, windsurfing, or kitesurfing here.

Scuba Dive at Murphy’s Beach (Molokai): Located just east of Kaunakakai, this beach has clear waters and a natural barrier reef. If you’ve always wanted to dive into the depths of the ocean, this is the spot to do it.

Visit the Volcanoes National Park (Big Island): Want to watch 300 thousand acres worth of volcanic activity? Head to this park located about 40 minutes south of Hilo. The site also features two active volcanoes: Mauna Loa and Kilauea. You can actually watch the lava flow from the volcanoes that meet the ocean. (Fun Fact: this lava continues to add to Hawaii’s total land mass; it’s like watching an island being created right before your very eyes!)

See the whales at Napali Coast (Kauai): This coast is also known as the jewel of Kauai and is lined with a range of tall cliffs and deep valleys colored in green and red hues. You can see dolphins, humpback whales, and green sea turtles here in January.

Meditate at Byodo-In Temple (Oahu): Located at the foot of the Ko’olau Mountains, this is a brick-red Japanese-style temple dedicated to Lord Buddha. It’s a good spot to sit down and enjoy solace, away from the hectic pace of life.

Other Activities Worth Mentioning

Cuddle up at the Lanai Cat Sanctuary: How do you feel about cozying up with more than 650 rescue cats? The sanctuary provides home, healthcare – and happiness! – to these abandoned fur babies who could always use your support. To reach the cat haven, take the second dirt road on the left after passing the airport, then look for a highway rock marker that says “Kaunolu: An Ancient Village”.

Head to the Kauai Coffee Company: Their coffee alone is enough to transport you to heaven, but there’s an additional option of hopping on a truck and taking a grand tour of the ginormous coffee plantation. With a hot cup of joe in your hand, the January chill of Hawaii weather won’t bother you as much.

Is January a good time to go to Hawaii?

We think so! If you want to welcome the New Year in style, the festive spirit of the first week will give you lifetime memories. This is also the month to see giant humpback whales up close and personal.

Is January hurricane season in Hawaii?

No. The hurricane season in Hawaii is from June to November.

Is it rainy season in Hawaii in January?

Yes. The rainy season here lasts from October to March, with December being the rainiest of them all. So, if you’re planning to visit in January, you can expect a few rain showers.

Can you swim in Maui in January?

Yes, you can swim on any island in Hawaii in January without donning a wetsuit. January may be rainy, but you’ll still get plenty of sunny time and the water temperatures are pleasant. With that said, you may need a wetsuit if you want to go snorkeling or deep sea diving.

See also: 25 Best Beaches in Hawaii For A Spectacular Trip

What should I wear in Hawaii in January?

Pack your usual summer clothes along with a waterproof rain jacket, windbreaker, light sweater, reef-safe sunscreen, rashguard, and an umbrella. It might be the middle of winter, but Hawaii still has tropical weather. There’s no need for heavy sweaters or winter coats.

Visiting Hawaii in January is the perfect way to kick off the beginning of any new year. After the first few days of the month, the crowds from the holidays will have dispersed and the islands will be very tranquil. The winter weather will still be pleasant, just bring a rain jacket in case of any showers.

Now that you know what to expect from Hawaii in January, it’s time to prepare your itinerary! Check out some of our other posts to assist with your planning.

If you’re thinking of going to Hawaii during a different month, check out the below travel guides we have created for you: