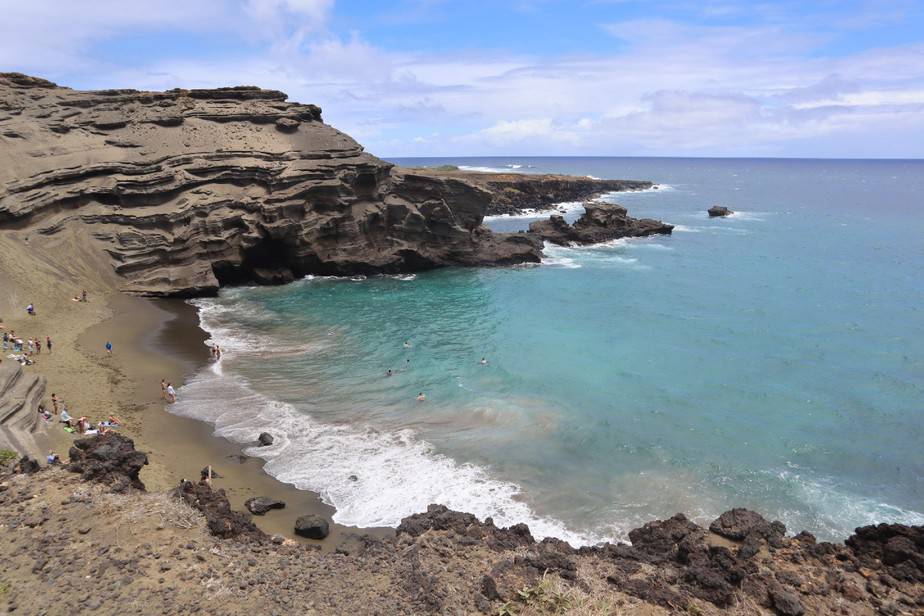 One of the most alluring states in the US, Hawaii has an impressive blend of tropical culture with the dazzle of large American cities. While it was only recognized as an American state in 1959, this archipelago of seven inhabited islands has a much longer history. Thanks to its location – smack dab in the middle of the Pacific Ocean – you’ll see influences here from all over the world.

If you’ve decided to go to Hawaii for your August vacation, beautiful natural landscapes and gorgeous beaches are not the only things that await you. There are hidden treasures in every corner of the state, from the quiet little towns in Maui to the busy Honolulu. In this concise guide, you’ll find everything you need to make the most of your trip.

Note on Related Articles: This article is part of a series of articles to help our readers decide which month is best to visit the Hawaiian Islands. If you are thinking of going to Hawaii in a different month, please check out our other articles listed at the end of this one.

August in Hawaii is sunny and balmy with temperatures ranging from 75°F – 88°F. Each island has its own micro-climates depending on the direction of the trade winds. August tends to be the least humid month across all Hawaiian Islands, making it a pleasant time to visit.

The weather this month averages about 85°F on all islands. August is usually the driest month of the year, but hurricane season may bring some unexpected showers.

The further you go into the tropical rainforest climates in Hawaii, the more humid you’ll feel. But as we said, August is the least humid overall. It doesn’t rain much in August, just about 1.5 inches on the Big Island, 1 inch on Oahu, 2 inches on Kauai, and 0.5 inches on Maui, on average.

You can expect the water to be around 80°F, which means it stays comfortably warm for you to enjoy swimming, snorkeling, deep sea diving, and more.

The ocean temperatures in August average at about 80°F, which is nearly 15 degrees warmer than off the west coast of continental America. The waves are usually larger on the south sides of the islands (like the Big Island) this time around as well.

Cost to Visit Hawaii in August

The hotel and flight prices at the beginning of August are typically higher than average and tend to drop towards the end of the month. If you want to travel to Hawaii on a budget, we’d recommend planning your trip in the last two weeks of August. This is because the school year in Hawaii starts in early August so the first week is still peak season and a bit more expensive. But it begins to quiet down as the month progresses.

The money you spend on plane tickets is likely to be the biggest portion of your budget. A round-trip from the west coast of the US can cost you $380 – $550. Direct flights from the east coast are more expensive at upwards of $900.

But hey, don’t worry. We have a few tried and tested tips for you to score a great deal on your flight:

Hotel rates are high in the first week of August at around $300 per night. The prices eventually reduce to about $250 towards the end of the month. If you’re on a budget and traveling in a group, you can find a vacation rental through Vrbo at $120-$135 per night. Airbnb also has affordable lodging options.

Camping is another great option, but requires some planning ahead. There are several State and National Parks in Hawaii with basic to fully-equipped camping facilities. You’ll need to reserve a permit in advance though, which costs about $5 per person or $20 per campsite for 5 people.

It is fairly easy to rent a car on any of the islands. The price per day is usually upwards of $100. Enterprise, Dollar, Alamo, and Discount are some of the most popular companies for affordable rentals.

One trick many tourists don’t know about is bidding. You can bid for a car through websites like BetterBidding or Priceline. If you’re lucky, especially during the off-season, you could end up getting a car at a much cheaper rate.

Before you rent a car, be sure to verify what the fees include because in some islands the taxes are not included in the prices they advertise. Taxes can cost you up to 40% of the car rent amount. A surcharge of $25 per day for underage drivers (21-24 years old) also applies on all of the islands.

You may also want to check out the app Turo. This is like the Uber of car rentals and allows you to rent cars from private owners. We’ve had excellent results using this app.

We recommend booking your flights, lodging, and car rental by the end of June or in the first week of July. This is the time when you’re likely to get most of the deals and discounts. However, if that’s not possible, booking at least 21-25 days in advance is an absolute must. Remember, Hawaii celebrates a lot of summer festivals and events in August. If you don’t book at least a month before your departure, you’ll have a hard time getting the room or car you want.

Is August Crowded in Hawaii?

The first two weeks definitely are. August is one of the peak months for tourists in Hawaii since the school is still out, making it an ideal time for family vacations. However, the last two weeks are not as crowded.

There are many events in Hawaii scheduled during August, but they vary year by year.

The Ko Olina Resort on the leeward coast of Oahu holds the world-famous Paradise Cove Luau every evening at 5pm. This luau is a full-scale production with live local music, hula and Polynesian performances, an imu ceremony, traditional Hawaiian games, and of course, a scrumptious buffet. Tickets cost $85 – $170.

The Best Luau in Oahu: A Complete Guide

71 Awesome Things to Do on Oahu With Your Family

If you don’t want to spend any money, head to the outrigger Kū haʻaheo Concert to watch local musicians, dancers, and other artists perform. It occurs on the shores of Waikiki Beach.

Have you always wanted a tattoo? Over 400 skilled tattoo artists participate in the Pacific Ink and Art Expo to showcase their stunning works. The event also has a keiki zone and plenty of food vendors.

The annual Waikiki Beer Festival is also held in August. There are more than 100 craft beers to choose from, including local flavors from Honolulu Beerworks, Aloha Beet Co., and Kona Brewing Co.

If you’d like to explore Korean culture, the annual Korean Festival is the place to be. There will be signature delicacies like kimchi and kalbi shortribs, in addition to a traditional tea ceremony, taekwondo demonstrations, art works, dance performances, live music, and much more.

Don the Beachcomber Mai Tai Festival is held annually this time of year to attract mai tai lovers from across the world. Some of the most talented bartenders compete for the title of Best Mai Tai and a $10,000 cash prize. Check here for more information.

A tradition brought over to the islands by Japanese immigrants, the Obon Dance & Festival is celebrated in Maui in August. The festival brings all local communities together to remember the spirits of ancestors. With authentic Japanese food, games for the kids, Bon Odori dancing, and arts and crafts, you’re sure to have a great time.

The Makai Music & Art Festival is held on the Makai Lawn every Wednesday in August. You can see some of the best musicians on Kauai perform, and shop from an assortment of handmade art, crafts, and jewelry from local vendors.

Turtle Watching (Oahu): You can see the rare green sea turtles swimming onto the shores at Turtle Beach and Laniakea Beach. The best time to see these cute creatures is at low tide during August.

Surfing at the Banzai Pipeline Beach and Waimea Beach (Oahu): Both beaches are incredibly popular among professional surfers because of their giant waves (sometimes soaring 30ft high).

Bodysurfing at Baldwin Beach Park (Maui): August brings calm waters, making it easy to bodysurf and swim, even for the newbies.

Snorkeling at Hapuna White Sand Beach (Big Island): This is an immaculate white sand beach stretched over half a mile and is super popular among the residents for its snorkeling.

Visit the Pu‘u Loa Petroglyphs (Big Island): These are ancient rock drawings dating back to the 16th century. Located inside the Hawaii Volcanoes National Park, this petroglyph field is a sight to behold.

See the Kalapana Lava (Big Island): Nestled in the Puna region, you can actually see the lava flowing here. There is no entrance fee.

Explore the Banyan Court (Maui): This is a 141-year-old Indian Banyan tree that stretches over almost an acre. There’s a local crafts fair held here every 2nd and 4th weekend of the month.

Get the “Pineapple Experience” (Oahu): Make your way to the Dole Plantation where you can partake in the world’s largest maze (Pineapple Garden Maze). There are several other free activities as well, including chocolate-making demonstrations, pineapple-cutting, and a fish-feeding pond.

Other Activities Worth Mentioning

One of our favorite tourist-y activities is on the island of Oahu: we are talking about visiting the Diamond Head volcanic cone. It’s about a 30-minute trek to reach the summit of this volcanic tuff cone and see the gigantic crater. The current entrance fee is $5 for non-residents; entry for residents and children under 3 is free. The vehicle fee is $10.

Is August a good time to go to Hawaii?

Of course it is! Hawaii is one of the few places in the world that has year-round good weather. That being said, if you don’t like the crowds, you should avoid visiting Hawaii in the first week of August.

Is August hurricane season in Hawaii?

Yes, it is. Hurricane season in Hawaii runs from June 1st to November 30th, but tropical cyclones can happen at any time.

Is it rainy season in Hawaii in August?

No. August is actually one of the driest months here, but occasional showers are not uncommon.

What should I wear in Hawaii in August?

Below are some items to add to your Hawaii packing list.

Pack light clothes, a swimming suit (or two), hiking shoes, sandals, a hat, a snorkeling shirt, and plenty of reef-safe sunscreen because August can get hot in Hawaii. Although it doesn’t rain much, we always advise our readers to be well-prepared with an umbrella or raincoat and a lightweight jacket.

With its perfect weather and low amounts of rainfall, August marks a fantastic time to visit Hawaii. If you’d like to dodge the crowds as much as possible, try to plan your stay for the second half of the month.

We hope this guide was helpful in planning your trip to Hawaii in August, while also saving some precious bucks. The next step is to pack your bags, board the flight, and say Aloha to Hawaii!

Mahalo for reading our post! Until next time, Aloha!