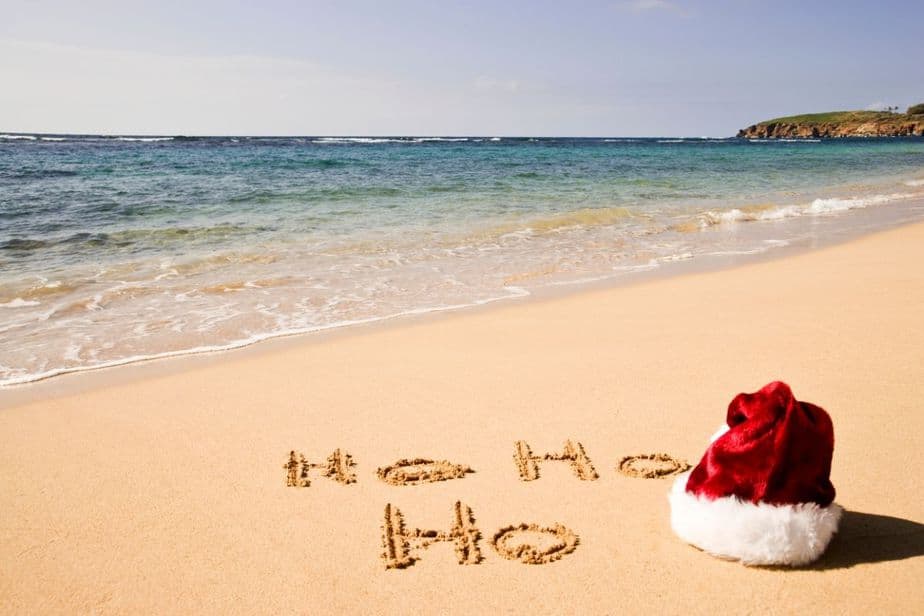 If you’re hoping to visit Hawaii around the holidays, we have good news for you! The islands are known for their rich traditions that stem from different cultures. Each place has its own spin on things, but they all come together to create a wonderful atmosphere during this time of year.

Hawaii’s islands are home to many unique Christmas traditions that set them apart from the rest of the world. From lighted canoe parades, dining on kalua pig and poi, and Santa pulled by dolphins, there are so many ways that locals get into the holiday spirit here.

Culture and traditions are what make Hawaii such a special place to visit during Christmas time. Keep in mind that there is no snow or reindeer around these parts. But that doesn’t mean visitors won’t be able to see plenty of twinkling lights as well as other local traditions that make this time of year so special for residents and visitors alike.

Makahiki is a Hawaiian celebration that means “year” and also heralds the new year.

Long before Christmas was celebrated in Hawaii, people had their own winter celebration. The Makahiki is celebrated with games and food, and some groups even raise banners like in ancient times.

Since the cultural renaissance began in the 1970s, more people are celebrating Makahiki again. Depending on the group, the celebration may start from late October to late December; some people celebrate on Thanksgiving weekend.

As the old year was drawing to an end in ancient times, priests would watch for specific stars or constellations in the night skies. The priests on the island would watch for Makali’i – the Pleiades – a star cluster that appears in the evening sky in October.

When they could finally distinguish Makali’i on the eastern sky shortly after sunset, they announced there would be a new moon that kicked off the “Makahiki” season—a time when warfare and most works are prohibited, and people celebrate with games and sports.

The Honolulu City Lights parade is an annual event that takes place in December. It is one of the most popular events in Honolulu. This parade is a wonderful way to kick off the holiday season. It is also an excellent opportunity to experience the culture of Hawaii.

Oahu really has the Christmas spirit; with countless parades happening on the island, your eyes will be delighted, and your Christmas cheer will rejoice. Honolulu City Lights parade is a dazzling display of street lights, palm trees dressed up with shimmers of lights and ornaments, and the procession of beautifully adorned floats.

Adorning the homes and gardens with Christmas cheer is all good and well, but not only are the homes here adorned with lights and decorations, but the boats will be joining in the Christmas cheer with a boat parade boasting decorations, lights, Santa, elves, candy canes and much more to bring the sea to life with glitter and glam.

An impromptu parade by the locals that will scream Christmas cheer as you walk through the lit-up streets enjoying the festivities, locals dress up and decorate their cars and trucks with lights, bells, and decorations and parade through the towns while blaring Christmas songs for all to hear.

Here we know that Christmas will be green and bright as you greet Mele Kalikimaka (Merry Christmas) as the palm trees sway and stars shine bright.

Mele Kalikimaka is the island’s Christmas greeting and their Christmas song that was made popular by singer Bing Crosby and the Andrews Sisters.

As the Hawaiian language does not consist of the letters ‘r,c, and s’ in their alphabet, it is fairly hard for locals to pronounce Merry Christmas, so Mele Kalikimaka was adopted as the island’s formal Christmas greeting.

This is a great way to get into the island’s Christmas cheer, and for some reason, when you say the words, it just makes you smile, and you can’t help but relish the cheer of Christmas.

Santa and His Dolphins

In Hawaii, there is a lack of reindeer, it seems, so Santa has traded his reindeer for help from majestic dolphins instead and arrives on the beach on an outrigger canoe pulled by dolphins, with a few elves to help out when he lands on the beaches of Waikiki.

In Hawaii, Santa has taken a much more relaxed approach and enjoys greeting visitors on the beach with his bare feet and enjoying the warm feel of sand between his toes. He also traded his long red winter pants for some funky floral beach shorts.

Even Santa enjoys the laid-back atmosphere that Hawaii has to bring.

Christmas Trees Are Imported to Hawaii

When you visit Hawaii over the Christmas season, you will still find hotels, shops, and homes that have embellished their Christmas tree and still put presents under the tree.

Much like the rest of the people on the mainland, local Hawaiians still enjoy putting up the Christmas tree and enjoy the smell of a fresh fir tree as it makes you think of snow-covered fields and sleigh rides.

Although the well-known Christmas trees are not grown on the island, there is a farm on Oahu that lets you pick your own look-a-like tree. These Norfolk pines are known as the Hawaiian Christmas tree; they feature long branches covered in soft green pines but, unfortunately, do not have that smell of fresh Christmas pine.

Hawaiian Christmas trees are generally decorated with fresh flower garlands rather than garlands and tinsel.

If the residents want the real deal, then you will find the harbor starts to get extremely busy just before December as it brings in loads of fir Christmas trees that people order online and have shipped all the way over the Pacific for a Christmas in paradise.

But let’s not count out the palm trees that line the streets; they also benefit from the Christmas cheer as they are embellished with lights, stars, and bells to bring an island twist to Christmas.

What would Christmas be without that Christmas dinner or the Christmas day lunch with family and friends? You can still expect to have a Christmas feast in Hawaii, but with a twist.

In Hawaii, your traditional turkey and mash are replaced with the kālua pig and sticky rice accompanied by a few other traditional dishes such as lomilomi salmon, sushi, lumpia, poi, and coconut pudding.

The traditional style of cooking the kālua pig is done in an underground oven called an imu. The pig is buried in the ground, covered with banana leaves, and surrounded by rocks to slowly roast the pig. This is a long and patient process but is so worth the wait once you taste it.

Christmas feast is often accompanied by luaus and celebrated beachside or in the backyard with entertainment, hula dancing, and music.

Carols Are Sung in Hawaiian

What is Christmas without singing carols and enjoying the togetherness the song and cheer bring to us? But in Hawaii, carols are sung a bit differently. Here we rejoice and sing traditional carols in Hawaiian accompanied by a ukulele.

Although there are still your traditional Christmas carols sung and enjoyed by all, some of them also have a twist on the words to reflect the paradise island.

In Hawaii, We Trade a Snowman for a Sandman

The tradition of building a snowman hasn’t been forgotten in Hawaii. But due to the lack of snow, they traded in their snowman for a sandman.

Family and friends gather at the beach to build some amazing sculptures of Frosty the Sandman. So swap your winter clothes for some bikinis and board shorts, and head down to the beach to enjoy a day of family bonding and build your very own sandman.

Honolulu is dressed up in Christmas lights and decorations every year to welcome the festive season. One of the traditions people have started is, whether near or far, locals make a small trek to the center of Honolulu to view the beautiful Christmas tree.

The tree stands proudly at 50 feet and is a sight to see. Hundreds of decorations and lights adorn the  Christmas tree that lights up Honolulu Hale and attracts hordes of people to gasp in its beauty.

Each year sees the tree decorated in a different theme that has locals drawn back to the event year after year for the reveal of the decorations.

Another quirky tradition is the one where locals gather indoors and crank up the air conditioning system to purposefully imitate a cold and crisp winter’s day or night, all the while sipping on some hot chocolate and singing carols.

The first dawn of the New Year is brought in with a traditional hike from different state parks in Hawaii and leads to the Makapu’u Lighthouse.

The guided hikes start with the blowing of a conch shell and end with the gathering of people watching the first sunrise of the year and all the new possibilities and joys it brings with it.

Do you have some more questions about Christmas in Hawaii? Take a look at some common questions and answers below.

In Hawaii, the traditional cookies and milk is replaced with a plate of sushi and a glass of passion orange juice for Shaka Santa to enjoy.

Do You Hang Stockings in Hawaii?

Since Hawaii does not need fireplaces due to its lack of a real winter, the stockings are hung around the house instead. In some cases, a  makeshift fireplace is built to hang stockings above.

What Do People Do After Christmas Dinner?

After enjoying Christmas dinner, everyone takes a stroll down to the beach wearing Christmas hats and leis to enjoy the sunset and watch the kids play with their new boogie boards.

What Do They Call Santa Clause In Hawaii?

Traditionally Santa Clause is called Kanakaloka, but they also refer to him as Shaka Santa, meaning hang loose after the giant figurine found in Honolulu that is brought out every year at Christmas. This 21-foot figurine weighing 21 tons has become somewhat of an iconic Christmas landmark in Hawaii.

If you’re looking at swapping your cold white Christmas and slippers and sleds for a warm tropical beach-filled surfing Christmas, then Hawaii is the place to do it. With its diverse culture, Hawaii brings you traditions that are so quirky yet so enchanting you can’t help but be amazed and fall in love with the island.

From traditional luaus to the importing of Christmas trees, Hawaii offers parades and festivities that bring out your inner child to emotionally fill you with hope and joy for the New Year.

95 Best Things to Do in Hawaii Right Now

Which Hawaiian Island is the Best to Visit